Throughout the month of September, we brought you stories highlighting prostate cancer survivors. They’ve all had one goal: encouraging men to pay attention to their health and get tested. A family recently contacted us with a story from a different perspective.

Terry Levan wore a lot of hats. He spent several years in the Navy. He was a firefighter and a bus driver. But his most important job was dad. With his wife Judy and their two kids, the family put down roots in Cumberland County. In 2009, Terry got the news that would change their lives forever.

“I was told that they had suspected that my dad’s prostate was enlarged and his PSA had been on the rise,” daughter Terri-Lee Christiana said.

Terry had stage 4 prostate cancer. At 61, he was told he would be dead in three years.

“I was devastated,” wife Judy Levan said. “It was horrible. I wasn’t talking about it much, either because I would fall apart, and I wanted to be strong for him.”

Terry’s brother died from prostate cancer in the 90’s, but like most men, Terry didn’t get tested even though his daughter would remind him.

“Hey dad, did you get your prostate checked?” Terri-Lee said, “and he’d say, ‘Argh, I’m not talking about that’.”

Terri-Lee moved back home to take care of her father.

“His attitude – initially, he was very angry and probably at himself,” Terri-Lee said.

“He just closed himself in when he was diagnosed,” Judy said. “He wasn’t accepting it. He wouldn’t discuss it. He didn’t want anybody to know. He was very, very withdrawn.”

Terry joined a support group and quickly realized what was most important.

“He just needed to digest the information and really focus on he didn’t want to die,” Terri-Lee said. “He wanted to be with his family.”

And that’s just what Terry did, but he also gave back.

“Anybody he could tell about prostate cancer, he would. He was at all of the walks,” Terri-Lee said.

Terry was beating the odds, all the while fearing what could come next.

“We dreaded that phone call,” Judy said. “I’d say to him, ‘Did you call yet?’ ‘No, Judy you call.’ A lot of the time, he didn’t even want to hear it. He’d have me call the doctor and get the number of his PSA results.”

“For six years, everything went very well,” Terri-Lee said. “It was only recently here last year that we discovered his prostate cancer had spread to his bone and he had established another large tumor on his spine that had manifest into a more aggressive type of cancer.”

Sadly, this would be a fight Terry couldn’t win. He passed away in February. He was 69.

“We knew his diagnosis came too late. He should have been checked earlier,” Terri-Lee said.

“Even towards the end, even in his last days, he was telling people how important it is to get tested,” Terri-Lee said. “He was sorry he didn’t do it sooner.”

This year’s prostate cancer walk on City Island in Harrisburg was the family’s first without Terry.

From doing research to raising awareness and money, Terri-Lee is working hard to follow in her father’s footsteps.

“My mission is not to let my dad die in vain,” she said, “and make sure that I continue and our family continues to spread the word.”

“He passed, but we’re not going to stop there,” Judy said. “Between the two of us, we keep pushing that people get checked. I want everybody to be a survivor.”

Since the cancer was so far advanced, Terry couldn’t have his prostate removed, so he had to undergo radiation and hormone therapy instead.

Terri-Lee and her husband own a winery in Enola. They’re holding a wine-tasting event there to raise money in the fight against prostate cancer. It’s Saturday, Oct. 15 from noon to 7 p.m. The cost is $25 a ticket, $40 per couple. For more information, go to https://paprostatecancer.org/event/stomp-out/ 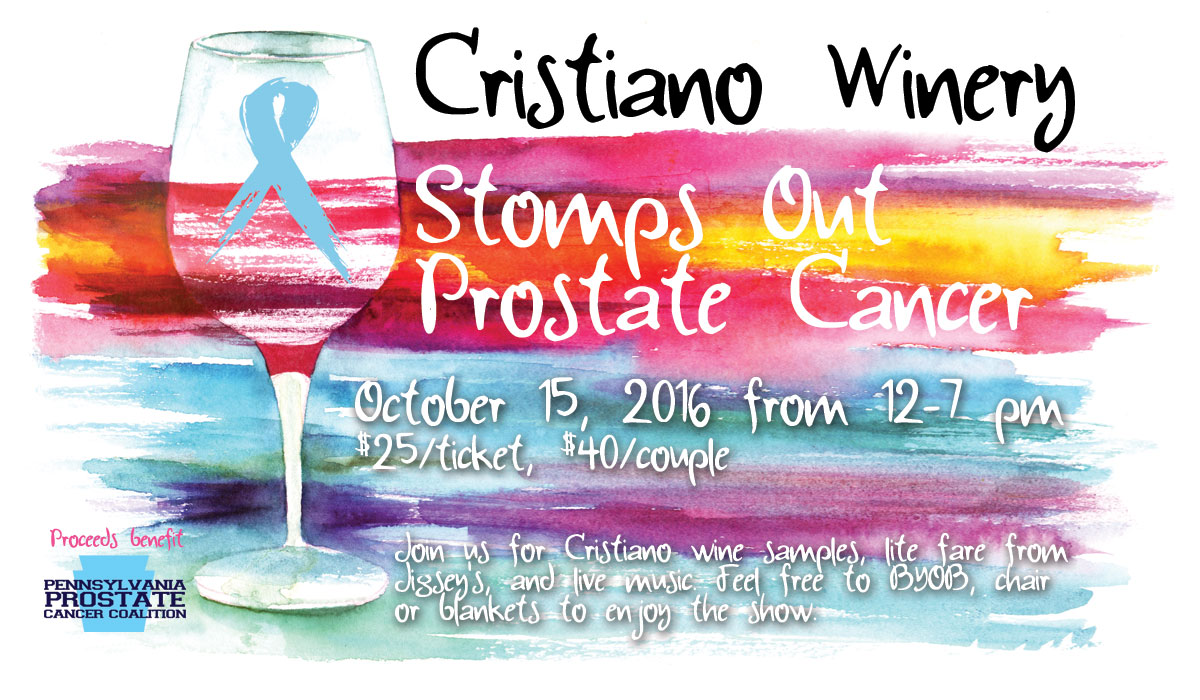